The Neurimpulse Lightpulse is an implantable neurostimulator that is available in 3 versions including the Lightpulse 100, 100L and 102. Each version achieves the same outcome of reducing pain for patients suffering from chronic pain however each variation does slightly differ in power output etc, but this will be discussed and decided between the patient and surgeon performing the surgery.

Each Lightpulse is dedicated to the stimulation of nerves in order to block pain signals reaching the brain and in-turn reducing the ‘sensation’ of pain, making it an effective treatment and control of chronic pain. Most typical neurostimulators are ‘central’ which is refereed to as ‘spinal cord stimulation’, however Neurimpulse have created the Lightpulse specifically to be ‘peripheral’ which simply means these can be implanted anywhere in the body where the pain is occurring, not just the spine. 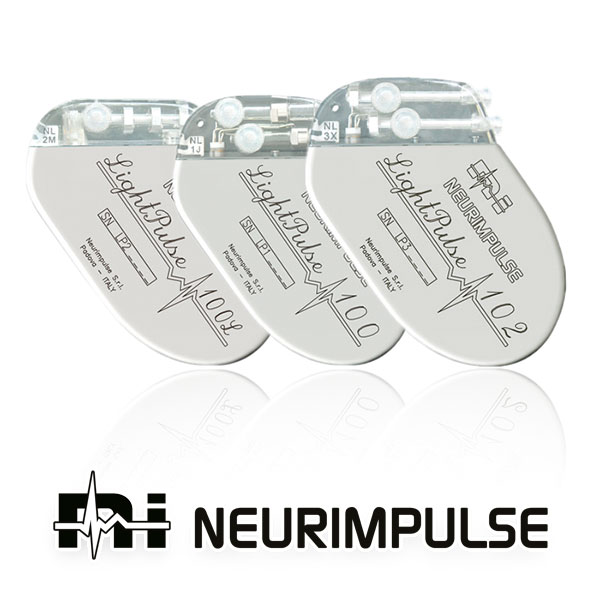 How the Lighpulse Neurostimulator Works

The Lightpulse range uses neurostimulation which intercepts pain signals before they reach the brain. To achieve this, each Lightpulse features a small stimulator which is implanted under the skin near the painful area and then generates electrical signals. These electrical signals run through the implanted leads and travel along the nerves, masking the feeling of pain and replacing it with a pleasant sensation. Many patients have reported that this feels very similar to a gentle massage and occasionally like a ‘tingling’ sensation.

Neurostimulation doesn’t cure the pain, it simply masks the body feeling the pain and is why this form of treatment is only recommended once all other non-surgical treatments have been attempted but with little results (such as medication or physiotherapy etc).

The pulse generator equipped with a battery is usually implanted under the skin in a comfortable area near the source of pain.

A thin wire which sends power from the neurostimulator to the surrounding nerves through the catheter tip, masking the pain.

A remote control which is given to the patient, allowing complete control in order to vary the intensity of the stimulation.

In 2007, Leonardo needed to undergo surgery to remove a chondroma (tumour) from his right hand side around the ribs. Unfortunately two months after surgery Leonardo began to experience very severe pain in his abdominal region. His quality of life started to diminish as he had to endure pain for a long time, limiting his physical ability.

Leonardo’s family doctor attempted to control the pain via a range of different treatments including oral medications which were not very effective. One year later Leonardo’s family doctor referred him to a pain management specialist who diagnosed him with intercostal neuritis and advised that Leonardo try Neurimpulse neurostimulation therapy.

Leonardo underwent a trial period to determine whether he was an ideal candidate for the therapy and soon reported that he felt significant relief from the pain due to stimulation. In May 2011, Leonardo had the neurostimulator implanted properly and never looked back. After the successful implant of the neurostimulator Leonardo reported a 90% decrease in pain and stopped taking medication entirely. Leonardo has since gone back to work and can even play football again.

In recent years there have been numerous clinical studies carried out in order to determine the effectiveness of neurostimulation therapy. The main purpose of these studies has been to evaluate parameters such as the reduction in pain, improvement in the quality of life and the level of daily activity for patients suffering with chronic pain. The diagrams below show the data obtained from some of these studies.

Prior to the implant not a single patient was able to perform strenuous work activities. Post-implant this figure rose to a staggering 70% of patients being able to return to work activities and help return to their daily routines.

The Neurimpulse neurostimulation system is truly innovative and differs greatly from other systems available in the market because it is specifically designed for peripheral neurostimulation which (generally speaking) involves less risk than spinal cord stimulation and is mainly due to the technology used being much less invasive.

There are many benefits to having a neurostimulator implanted, however as with any therapy, side effects may arise.

Advantages of the System

It is also worth considering the fact that by having a neurostimulation system implanted will involve surgery which comes with its own seperate risk of gaining infection and possible requiring the removal of the system. Also a consequence of any type of complication related to the system it may require additional surgery to reposition or replace components.

Please feel free to contact us if you have any further questions.